Honu Putters can be built in different configurations for different putting stances. The clubhead is the same, with its wonderful feel, balance and looks, but the shaft length and angle differs to best match the body geometry for the different stances.

In the conventional familiar stance, the feet are roughly square to the target line, the ball is somewhere between the center of the stance and the leading foot, the putter is held near the end of the grip, and the body is somewhat bent-over. This common stance can be very effective, but it requires a lot of skill due to some inherent biomechanical disadvantages.

The "bent-over" position puts a lot of stress on the legs, hips and lower back, because those areas must support the weight of the head and shoulders via muscle power. That can result in soreness after a relatively short putting practice session. Toward the end of a round of golf, your putting can deteriorate as you get tired and have more trouble staying still in your stance.

Another problem is the tendency to "get wristy". The conventional setup puts the grip in an unsupported position where the wrists must actively control the shaft angle. Small changes in that angle - "floppiness" during the stroke - result in directional inaccuracy. Great putters have exquisite control of their wrists, and excellent timing, so they are able to maintain a square putterface at impact. It's not easy - it requires consistent practice, and it often "breaks down" under pressure. Different hand positions like "left hand low" and "claw" can help to control this problem, but they come with disadvantages such as reduced distance feel and suboptimal eye position for target sighting. I putted left-hand-low with a conventional stance for many years. It gave me better results on short putts, but was not so good for long putts where distance control is the key.

Finally, the conventional stance is not the ideal visual position for targeting. The shoulder position for the bent-over stance puts your head in a "looking down" position (or even looking slightly backward, in the case of left-hand-low). Ideally, you want to be looking toward the target. You can of course twist your neck, but that adds stress and tends to make you "pop out" of your stance - the dreaded "I looked up" failure.

An alternative "arm-lock" technique uses a longer shaft and grip. The club is held farther down the grip, with the butt end of the grip resting against the inside of the leading forearm. Matt Kuchar is a top player who uses that style. Arm locking reduces the tendency to "get wristy", promoting a simpler "pendulum" motion. It's an alternative to left-hand-low that avoids the feel and "looking the wrong way" issues. (Some people try to use left-hand-low with arm locking. That seems like an attempt to use two different techniques to solve one problem. For me, arm-lock + left-hand-low results in too much tension in the left shoulder area, so I don't think it's a good combination.) Arm locking is perfectly legal - while the USGA has banned "belly putters" where the butt of the grips is stationary against the torso, forearm-locking is explicitly allowed.

A third variation combines arm-locking with a stance that is more upright and somewhat open, as exemplified by the "Acculock Ace" putter from BioMech Golf. In addition to the benefits of arm locking, the upright/open stance is much easier on the hips and legs, and also results in a advantageous vision angle. If you have ever spent much time on a practice putting green, you are probably familiar with hip soreness from bending over for too long. That can limit the time you spend practicing! USGA rules prohibit a shaft angle that is too upright (the shaft must be at least 10 degrees offset from vertical), so you can't legally do croquet-style or some variants of side-saddle putting, but there is a happy medium that lets you stand up reasonably straight within the letter and spirit of the rules.

Which should you choose?

If you are just starting out in golf, I suggest that you give the arm-lock + upright stance technique a try. I switched to it after playing golf for many years and really like it. I think that it is fundamentally a better way to putt. If you haven't already "dialed in" a conventional putting stroke, you might as well learn the easier/better way.

If you are already a good putter with a conventional stroke, you should probably stick with the style that you know. The "training effect" from long practice can overwhelm any inherent advantages that a different style might have.

If you are somewhere in the middle, and especially if you are an otherwise-good player who struggles with putting, you might consider giving either arm-lock or arm-lock+upright a try. It will feel weird at first (as will any change from established habits), but you might find, as I did, that you like the new way better. It took me a few days of daily practice to become as good with arm-lock+upright as I was with conventional left-hand-low, and since then I have gotten better and better. 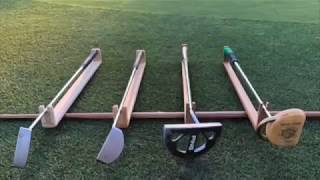 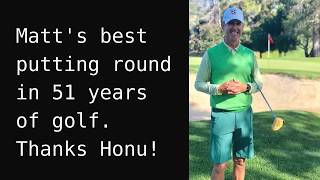 Custom Fitting is Crucial for Juniors 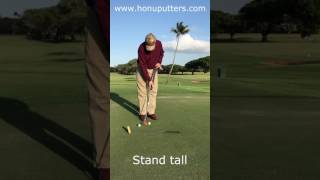